The Future for Fort Lauderdale Airport

The Fort Lauderdale airport of the future will have millions of more passengers each year. But the time to get to ready for them is now. 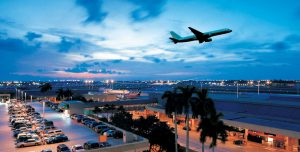 The Future for Fort Lauderdale Airport

Future construction projects and improvements include:

— An elevated people-mover circling the airport terminals and connecting to a transportation center above U.S. 1. The center could allow future passengers to connect to Brightline or another rail service, or make a connection that takes them to the Broward County Convention Center or cruise ships sailing out of Port Everglades.

— Terminal expansions increasing the number of gates from 62 to 95, allowing for hundreds of more flights a day to and from the airport.

— Widening the terminal roadway with more curb space for picking up and dropping off passengers.

— Adding a new hotel that would be built with an adjacent nine-level parking garage on the airport right next to the terminals, complete with conference space and an exterior courtyard.

— Installing higher ceilings, wider corridors and expansive windows. These changes are already visible from recent construction work and would continue with future expansions, along with more shopping and restaurant options for travelers.

The airport currently is in the middle of $3.2 billion in improvements that has added gates, built a runway above Federal Highway, added new parking, stores and shops, and which will internally connect all the terminals so travelers will no longer have to go outside to get from one terminal to another.

“We know that we’re in the billions of dollars. But again, this is a 20-year planning horizon,” Airport Director Mark Gale said. “We know we have a population in Broward that is growing and we have airlines … that want to grow.”

Commissioner Barbara Sharief said she wants to ensure that the improvements continue to enhance visitors’ experiences.

“We far exceed user friendliness when it comes to the surrounding airports, let me just put it that way,” Sharief said. “I hate Miami airport.”

The money for the projects is expected to come from airport revenues and contributions from airlines who fly there.

Gale said the exterior improvements — the people mover, wider roads — would be part of a seven-year first phase of construction. The master plan will be a blueprint that can be adapted, based on future circumstances, he said.

For instance, officials aren’t certain yet what would be included in the transportation “intermodal center,” which would be in the middle of the access road loop to the airport above U.S. 1.

It could include employee or public parking, baggage or drop-off areas for early-arriving passengers, food and entertainment options and links to other transportation.